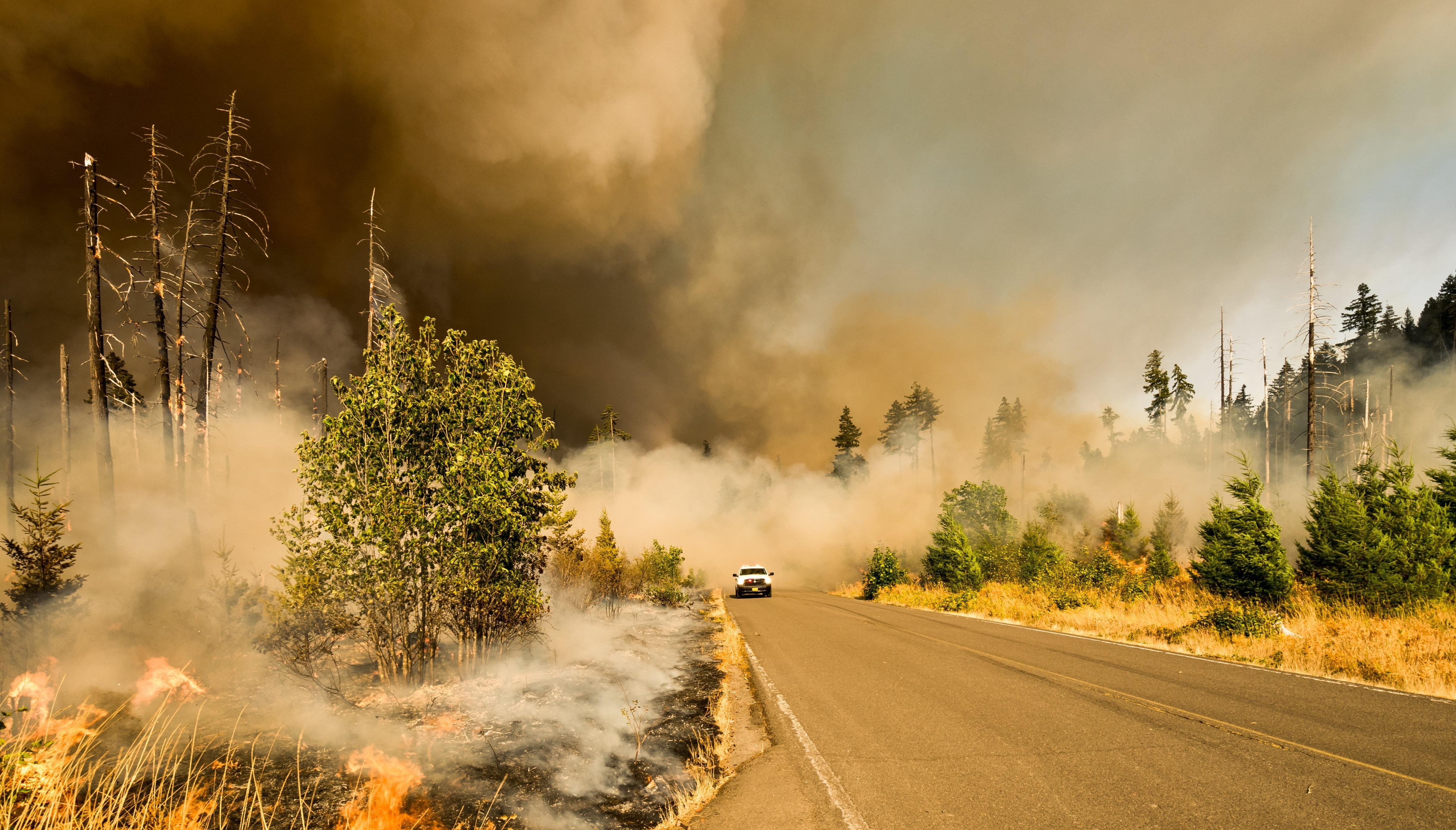 Done with being plagued by wildfire smoke.

Every year wildfires rage on. The worst thing is that this disaster tends to get more intensified over the summer. And the picture is rather clear in California.

In order to reassure people troubled by wildfire smoke, I’d like to recommend the 5 best air purifiers for wildfire smoke for your benefit. First, let’s get to know wildfire.

A wildfire is an unplanned, unwanted, uncontrolled fire in an area of combustible vegetation starting in rural areas and urban areas, according to Wikipedia.

Wildfires would release smoke, including carbon dioxide, black and brown carbon particles, and ozone precursors such as volatile organic compounds and nitrogen oxides (NOx) into the atmosphere.

Those particles are extremely harmful to children, asthma sufferers, or people with heart and lung disease. Let alone the environment. Wildfires can cause great damage to the region and beyond. Thus in this sense, an urgent solution is rather necessary, such as an air purifier for wildfire smoke.

Why is wildfire handling so urgent?

When we think of wildfire, the first thing popping into our heads must be the state, California.

By May 18 there had already been 2,436 fires in California this year, scorching 5,956 hectares of land, compared with 1,554 fires that burned and 1,059 hectares over the corresponding period last year, statistics reported.

Some particles from a wildfire are small enough to be breathed into your lungs, causing illnesses such as bronchitis, asthma attacks, and even heart attacks and strokes, according to the Centers for Disease Control and Prevention and the Environmental Protection Agency.

Thus dealing with wildfires is an emergency.

Here comes one viable and available solution to this —- Air Purifier.

Before we elaborate on how air purifiers work, we need to know what kind of substances wildfire releases.

Just like building fires and cigarette smoke, wildfire smoke contains high levels of toxic compounds and tiny particles that can damage your heart, lungs, and other organs, as well as cause diseases. Chemicals released by wildfires include nitrogen oxides, carbon monoxide, and various volatile organic compounds (VOCs).

What’s worse, smoke from burning poison oak and poison ivy may contain irritants from these plants.

When wildfires burn into cities or residential areas, smoke also draws chemicals from plastics and other man-made materials, said Wange Cascio, a cardiologist, and director of the Environmental Protection Agency’s Center for Public Health and Environmental Assessment.

And most of these particles, no matter small or big, can be removed through an air filter, a device to remove solid particles. Traditional air purifiers have a 3-stage filtration system, that is the pre-filter, the HEPA filter, and the activated carbon filter.

The pre-filter captures large particles such as dust, lint, fibers, hair, and pet fur, and maximizes the HEPA filter’s life by protecting it. The HEPA filter removes 99.97% of particles as small as 0.3 microns (µm) in diameter, including smoke, dust, mold spores, bacteria, viruses, and allergens such as pollen, dander, and mites. The activated carbon filter removes compounds such as formaldehyde, benzene, ammonia, hydrogen sulfide, and VOCs.

If you want to buy the best air purifier for wildfire smoke, it must contain the following two parts.

Five air purifiers from different brands will be recommended, covering almost every income group. All the models boast their True HEPA filter and the Activated Carbon Filter. I bet you will find your favored one.

Known for the HEPASilent technology, the Blueair Classic 605 leverages electrostatic charge and mechanical filtration, which work like a magnet by drawing particles and pollutants to the filter and help to achieve the best performance of the True HEPA.

Dual protection filters allow you to enjoy an extra level of carbon filtration to remove odors and smoke from wildfires.

1. Built-in wheels. You can slide your air purifier easily from one room to another.

Featured by advanced HEPA filtration with six stages of purification and deodorization, the RabbitAir MinusA2 boasts its odor remover customized filter which can trap and reduce odors from pets, cigarettes, and cigars, cooking, and mildew.

1. Adaptable. The MinusA2 can be placed on the ground or be mounted on the wall.

2. BioGS HEPA Filter. Unlike a typical True HEPA Filter, it can do more, including reducing the buildup of common allergens, reducing the growth of bacteria and viruses on the filter, and prolonging optimal filter efficiency.

The MA-40 purifier is featured by two HEPA filters, the high-efficiency H13 TRUE HEPA filter and the higher-grade of HEPA filter respectively.

1. Good-looking design. With a glass touch screen, the MA-40 is applauded for its sleek design, which is perfectly fit for nearly every situation and room.

Featuring a high-efficiency 3-stage filtration system, the Levoit LV-PUR131 is ideal for allergic people as it can remove up to 99.97% of dust, pollen, and other allergens as small as 0.3 microns.

Over 20,000 columnar activated carbon is 100% natural ones derived from organic coconut shells free of chemicals and additives. Thus in this way, the Levoit LV-H131 can better deodorize and absorb heavy smoke and nasty odors from the air.

2. Based in California. Levoit knows better that millions of people suffer from the heavy smoke and pungent smell of wildfires every year. Thus it’s determined to bring the best and the most cost-effective air purifier to you all.

The Honeywell HPA020B Tabletop has a 2-stage cleaning system to help clean the air that passes through the filter. The activated carbon pre-filter absorbs VOCs, gases, odors and traps large particles. The HEPA filter captures up to 99.97% of the particles that pass through it as small as 0.3 microns.

1. Compact design. The Honeywell HPA020B is perfect for small rooms in the home office or nursery.

3. Honeywell has 25 years of air cleaning expertise and is the #1 brand recommended by allergists.

More Tips to Protect Yourself From Smoke

Wildfire smoke can exert a negative yet long-term influence on people’s health and the environment. The result is rather depressing. Even so, there is still a lot we can do to protect ourselves as smoke-free as possible.

1. Stay indoors as much as possible with doors and windows closed.

2. Keep the air inside clean. Do not use a gas stove and fireplace.

3. People with asthma or lung disease living in wildfire areas should consult doctors frequently. If possible, the wisest thing for them is to move away from the burning area.

4. People in smog-covered areas try not to exercise as physical activities increase respiratory rate. It is recommended to pay attention to indoor air quality during this period and avoid using aromatherapy, candles, and most importantly, smoke cooking.

5. If you see smog, smell smoke, or know the fire in your area or somewhere you plan to visit, check the air quality index (AQI) to see if you need to limit your outdoor time.

6. If you plan to go out, you must wear anti-haze masks or filtering facepiece respirators, and glasses to protect your facial features. After returning home, change your clothes, rinse your red, irritated eyes and clean your hair.

8. Run an air purifier 24/7. If near the conflagration area, turn on the humidifier as well.

Where should the air purifier be placed for the best effect?

In order to get the maximum efficiency from the air purifier, you need to position the device where you can maximize the airflow into the system.

Read the user manual carefully and pay attention to the instruction saying the minimum recommended distance around the device.

Placing the air purifier near the center of the room or close to you is far better and more effective than putting it in a corner. In this case, you can breathe the cleanest and freshest air as much as possible.

How long should you run the air purifier?

Air purifiers should run 24 hours a day, 7 days a week (24/7). The longer the air purifier operates, the cleaner the room will be.

The moment you turn off your device, pollution will start to build up. Thus it’s best to keep it running all the time.

How often should the filter be replaced?

The good news is that most air purifiers have a built-in filter replacement indicator, reminding you to replace the filter in time. If your device doesn’t have it, form a habit of checking the filter regularly every few weeks.

It’s time to replace your activated carbon filter if you see a thick clastic coating. The same is true for the HEPA filter if it turns black.

Why is wildfire smoke harmful to people’s health?

The ultrafine particles can get deep into your lungs and cause illnesses such as lung cell injury, impaired immune system, heart disease, chronic obstructive pulmonary diseases, bronchitis, and asthma.

Exposure to large smoke particles between PM2.5 and PM10 can cause eyes burning, coughing, wheezing, shortness of breath, runny nose, and scratchy throat.